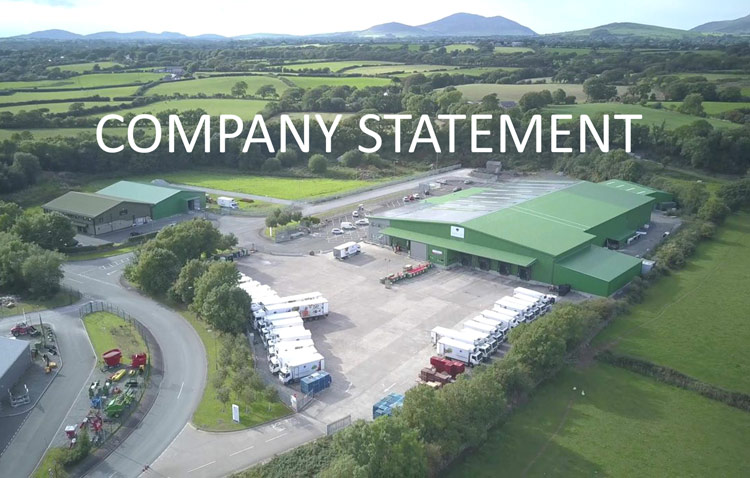 No individual, community or business has escaped the battles faced throughout the Covid-19 crisis. It has had an overwhelming impact on everyone, including the foodservice and hospitality sectors. With the closure of most food and leisure sites, at a time when the industry should have been heading into its peak season, these closures resulted in a significant overnight drop in sales.

We utilised the generous furlough scheme for a number of employees, operating with only skeleton staff to manage the business’ daily needs. With no clear road map offered by the Welsh Assembly on the planned re-opening of hospitality, the business has been under severe stress.

In order to secure both short and long-term future success, we have needed to review our entire business operating procedures and proposed a number of changes. We do understand that these proposed changes will have a significant impact on our employees and we aim to keep any disruption to a minimum.

Regrettably, we have entered into a period of consultation with our employees which will unfortunately result in redundancies, expected in the region of 15 job losses across the business.

We expect a lengthy and uncertain recovery period over the next 12 months, however we remain confident about the future of Harlech Foodservice continuing to provide a great range of products at competitive prices whilst continuing to deliver excellent customer service; we have strong cash flow and will weather the storm.

We would like to take this opportunity to thank our staff and customers for their cooperation, loyalty and hard work over these difficult times.

The board have reviewed the current coronavirus situation and the impact on its staff, customers and general business
One of our main priorities is to safeguard staff jobs. After consultation with our employees, reduced working hours have been agreed and implemented across the board.

We are also trying to keep the impact on our customers to a minimum. Normal customers credit facilities and the £60 minimum order spend remain unaffected.

We have taken the decision to reduce customers delivery schedule down to a 3 day week until the situation improves. Most customers order 3 or fewer times a week so we hope for minimal disruption. Our team will inform you of new delivery days by end of week.

We will continue to accept orders via the usual channels i.e. App, website and telephone. To Register for online ordering and log-in details please email [email protected] or speak to your telesales.

We are working hard to maintain service level, however, as I’m sure you can appreciate, we will inevitably experience supplier short deliveries and may need to offer substitutes.

If you wish to discuss any of the above points in more detail, then please get in touch with your usual Telesales or Account Manager

We will continue to adopt best practices throughout the business and follow advice from the relevant authorities and monitor the ongoing situation closely.

We wish all our customers well over this difficult, unprecedented situation that we find ourselves in and hope this is only a short-term problem.

A BUTCHER with a big appetite for the great outdoors is raising money for vulnerable children by walking to the top of Snowdon every week for the entire year.

That means keen walker Llyr Williams, who works for growing food distribution firm Harlech Foodservice, will have climbed the equivalent of Everest five times, trekked more than 400 miles and scaled more than 150,000 feet when he successfully completes his gruelling 52-week challenge in aid of Action for Children.

The 32-year-old will be heading to the summit come rain or shine, or even ice and snow, with the aim of beating his current personal best time of one hour and 27 minutes tackling the strenuous Rhy Ddu Path.

Llyr, who lives in Llannor near Pwllheli and is a former student of Ysgol Y Moelwyn in Blaenau Ffestiniog, has worked as a butcher at Harlech Foodservice which has its headquarters on Parc Bwyd, Llanystumdwy,near Criccieth, for more than two years.

The company, which employs around 200 people and has a satellite base in Chester, has named Action for Children as its chosen charity during 2020. It’s a UK-wide charity that protects and supports vulnerable children and young people by providing practical and emotional care.

Llyr said: "I go walking every week anyway and having just achieved my personal best time walking up Snowdon, I thought there must be a way of doing this for charity and making it a proper challenge.

"My personal best is 87 minutes to the summit. There are four or five paths you can take but I prefer the Rhy Ddu Path as I think it's more rewarding and challenging than the others, and the views are stunning.

"I usually walk up to the summit of Snowdon six or seven times a year so to do it every week will be challenging. The changing weather will obviously make things difficult.

"I intend to do the Rhy Ddu Path for them all but it depends on the weather. It's just the snow and ice that would require me changing the path for safety reasons. I'd go through Llanberis as it has a wider track.

"I've only ever climbed Snowdon once at peak time in the summer. Since then I've always done early morning walks before sunrise which is what I'll do for the challenge.

"Not only is it less hot, it's also less busy and you get to see the sunrise which is spectacular. It's like the Lion King - honestly that's the best way of describing it! The changing colours on the mountains and surroundings are just incredible."

Llyr, who has a two year old son called Ianto, says the biggest reward from completing the challenge will be knowing that his efforts will go towards helping children that need it the most.

Last year, Action for Children helped more than 387,000 children and families across the UK - that could be protecting them from neglect or abuse, or supporting those who are homeless.

“Going up Snowdon once is no mean feat but every week for a year is amazing and some of the photos I’ve seen already have been beautiful.

“It was wonderful to be chosen by Harlech Foodservice in the first place but Llyr’s challenge is really setting the tone for a brilliant year’s fundraising with a team of five also already signed up for a 10K race in Anglesey in the Spring.

“This is all to help the children, young people and their families who need it most in our communities and Action for Children is really grateful for all Harlech’s staff endeavours.”

Llyr added: "The support I've had from my colleagues at Harlech Foodservice has been brilliant especially considering I only mentioned the idea of the challenge two weeks before Christmas.

"I've had one lad in my team come out on the first walk with me. It was his first time doing it and he thoroughly enjoyed it. Hopefully I'll get a few more involved in it over the course of the year.

"If you can go up in just under three hours you're doing well. I'll be aiming to try and beat my personal best at some point, it would be nice to do that, but at the end of the day I'll be achieving something anyway just by going up every week.

"I'm using my hobby to raise money for charity. Walking is my exercise, I'm not a sports fan. This is what I've enjoyed doing since I can remember.

"As a dad myself it's really rewarding to support a children's charity such as Action For Children. It doesn't matter what you do, just a small thing will make a massive difference.

"Sadly not every child's upbringing is brilliant so it's nice to support the charity and know it could be helping make a child's life more comfortable."

To support Llyr and donate to Action For Children via Harlech Foodservice, go to www.justgiving.com/fundraising/harlech-foo...

To find out more about Action For Children, go to www.actionforchildren.org.uk